The idea in a nutshell

The gender Pay Gap exists, but it’s smaller than most people think

The media pushes a pretty consistent message concerning the gender pay gap. In my view, what they present is, misleading. 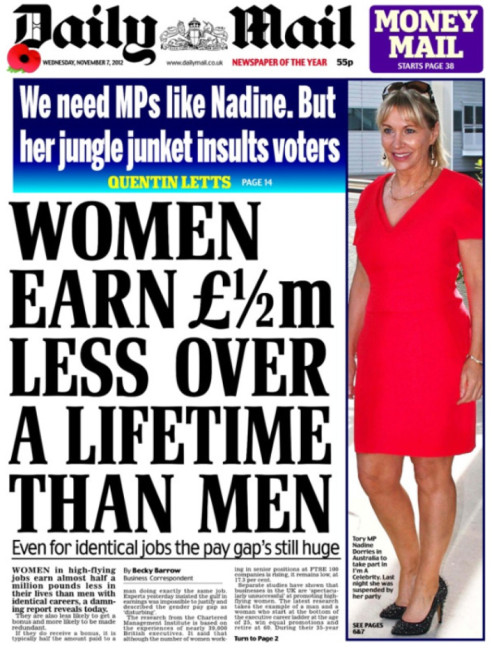 To be fair to the press, the information they are presented with, from which they generate these headlines, is this sort of thing. It’s not hard to see why the press report it the way they do.

The problem is those stats about the Gender Pay Gap are misleading. The stats compare the average take home pay of women across the economy, alongside the average pay of men. They ignore the fact that men and women do different jobs and that men typically work longer hours.

When you compare the hourly wage of a man and a woman doing the same job, the gap shrinks to almost nothing.

This is not a controversial standpoint. I am not the first to say it.

And the American Enterprise Institute

Other reasons why it’s perfectly clear that there is no gap (when figures are ‘adjusted’):

And anyway, discussion of the Gender Wage Gap misses the point

Money is only one part of life. There are other things that people value. The ability, for example, to determine your own course in life – agency; the right to a long and healthy life; the right to the pursuit of happiness.

Assume we made some change to the world eliminating all Gender Pay Gaps of any sort (even an unadjusted one). To ensure they earn the same on average, women are now put in to jobs (presumably by the government) which are identical to men. As a result, on average, across the economy, they now earn the same unadjusted average wage. In this example, those women have gained some money but they have lost out in other areas.

Interestingly, a similar piece of research from Princeton highlights that women are becoming less happy over time – and attributed part of the reason to, “Women’s achievements in recent decades. With more prospects outside of the home, many women are experiencing difficulty balancing a career and a family, which saps happiness.”

In summary, the research appears to show that with the career decisions they are making at the moment, women are earning the same as men for the same work. In addition, they are also leading longer, happier lives, performing more meaningful roles than men, and are in jobs they think matter – such as teachers and nurses. To the degree women have become more like men in the workplace, some research suggests that it’s made them less happy.

I actually don’t think the subject has to be broken down on grounds of gender at all. People who do the same job (and, I assume, achieve the same results) should, on average, be paid the same, irrespective of any other factor – including gender.

However, if one individual (of either gender) chooses to trade some of their income for a job which will give their life more meaning, or fits their lifestyle or interests or just on a whim, they should, in my view, be allowed to pursue that. If their decision creates an (unadjusted) pay gap, but increases happiness in some people through their career’s contributions to their community, I can’t for the life of me see the problem with that.