The idea in a nutshell

Things are tough for many Australians

The Liberals have been raising the issue of energy prices and the impact they have on normal Australians. The debate around Energy prices was part of the reason Malcolm Turnbull was ousted as PM recently.

The government suggests that Energy prices are one of the major factors for Australians ‘doing it tough.’ Source : The Australian

It’s interesting to consider the reality, however. Energy makes up only 3-10% of household budgets. (Those with lower incomes tend to spend a higher proportion on energy.)

It’s the tax system which is behind Australians’ struggle. The government is blaming energy companies, among other things, but it’s actually them putting the boot in to Australian families through Fiscal Drag.

What is Fiscal drag / bracket creep

Imagine a simple example in which :

Imagine you were earning $36000 and there was a 3% inflation rate. Your wages go up by the same amount. After a year or two, you’d move to the higher tax rate and pay a higher proportion of your real (after inflation) income in tax. Source : Wikipedia.

There is actually a very easy metric to use when you want, to determine the real amount of tax you / we pay, on average, across the economy. The CIS, Center for Independent Studies produce it every year. It’s called Tax Freedom Day and it’s the date on the calendar, by which you cover the annual tax burden. In 2018, the date was April 16th.

It’s a useful measure because, by anchoring the tax burden as a time period, the complexities of ‘inflation’ adjustments and all the other thing which could be used to muddy the waters are removed.

Over the next 5 years, the Center for Independent Studies says the tax burden paid by individuals will increase another 12%!

Other data showing the effects of Fiscal Drag on Australian incomes 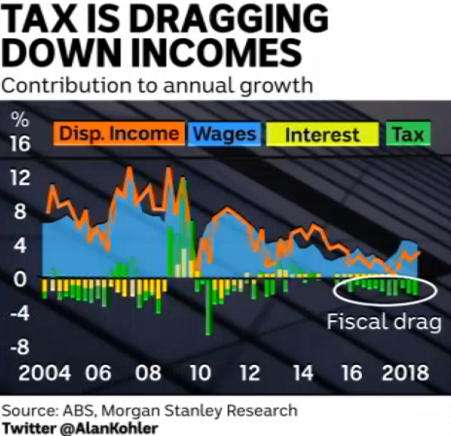 Alan Kohler, from the ABC points is just one source indicating that it’s actually Fiscal Drag which is affecting real incomes, not things like energy prices. Source : ABC

Kohler’s chart also shows that it’s this phenomenon – bracket creep – which has actually curtailed real income growth in Australia. Basically, the amount the government is taxing normal people, when they are already ‘stressed’ is what is making the bills hard to pay.

So, real wages are stagnant, and the prime minister isn’t disingenuously distracting people by talking about fixing an energy problem his party’s inaction caused. The reality is that he and his party (specifically their income tax rules) are the most substantial component of the cause of low and declining net incomes.

It’s a crazy situation made worse by the fact that the reality is not being discussed in the public eye, and the concepts involved are not commonly understood. It’s a spaghetti of misunderstanding about which politicians deliberately obfuscate, accentuating inequity and precluding solutions.

Just to be clear, for net incomes to remain the same, people will have to receive a 12.6% wage increase over the next 5 years. Or the government will have to change it’s tax system and raise it’s tax thresholds in line with inflation.