The idea in a nutshell: Soon, we might have a cacophony of bots ‘shouting’ for our attention. They could be ‘chasing’ us, wherever we go. We may even need help from ‘Nazi’ virtual assistants to help us manage the situation. There might be some ‘good’ (for consumer) effects, like generally lower prices as a result of improved competition. But, when options are compared, who decides the answer most likely to be right for us, what criteria do they use and how ‘fair’ is that ?

What might happen in the second step – after the bots have come?

I’ve written in other articles about the material impact the arrival of bots is likely to have on our lives. Thinking through the second and third steps of their possible deployment, presents some interesting potential ramifications.

First, each company produces a bot & things get ‘noisy’

The first step in the progression is when each company comes up with a bot and designs it to track customer / prospect behaviour in some messaging channels. Each of these companies start with ‘trigger words’ and automated responses. One good example might be an Optus bot hanging around in Facebook messenger waiting for a user to say ‘prepaid’ or ‘phone plan.’ When they do say one of those words, Optus steps in and says ‘hey, we can help you !’

For reasons I have tried to explain, my view is there will be a single, very sophisticated bot (a ‘Virtual Assistant’) at the center of the world, produced by either Facebook, Microsoft or some of the other usual suspects. That Virtual Assistant then negotiates with other bots for you. 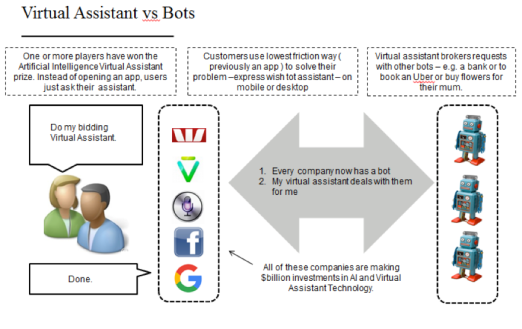 Nazi virtual assistants and their effect on price competition

Working at a bank, I am really interested in what the evolution of these Virtual Assistants will lead to. I think one effect will be a great deal of competition around pricing. I suspect that will be very good for consumers and very bad for the big banks.

In the example below, the intention that the husband and wife have is that they want to establish the most competitive rate for their mortgage. They ask their bot – whichever is their favourite from the best around, offered by Apple, Facebook, Google or others – and it brokers to get responses from the bots representing each bank. 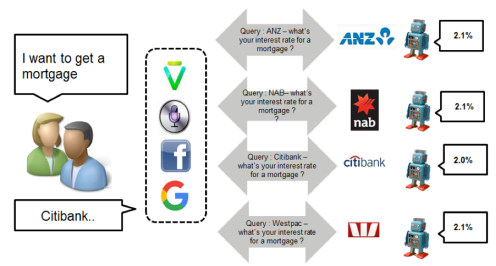 This picture demonstrates something of a nightmare scenario for people with poorly differentiated products. In my view, the products offered by most companies are poorly differentiated. Banks, telcos and most industries are concerned about disintermediation – someone stepping between them and their customers. In this scenario, disintermediation is no longer a risk, it has happened. The Virtual Assistant now prioritises the offers that customers are provided.

From the point of view of the consumer, things actually improve. It’s no surprise that the Big 4 banks in Australia run an Oligopoly. They make a few billion a year out of it, each.

The truth is there is a great deal of choice out in the market for any financial service. Unfortunately, people are often unaware of their alternatives. From the point of view of businesses like this, reducing the friction in the comparison process, creating a race to the bottom. Many businesses will face an equivalently competitive and uncertain future.

But all this competition could create pressure on prices. Since these bots and, more generally AI are affecting the whole economy it could even lead to deflation – a general decrease in prices – that has some nasty follow on economic effects.

Comparing the options all these bots want to provide

The ramification appears to be that the Virtual Assistant has to decide which response, from the sea of shouting bots, to show you. This puts them in a very strong position indeed. Lazy shoppers and those asking Virtual Assistants to provide options will require transparently reasonable transparent information about the criteria used to determine the order in which things were sent.

The future is either going to be a lot noisier or, it’s going to involve a ‘Nazi Bot’ who acts on your behalf to curtail all of these approaches and show you only the most ‘relevant’. And therein lies the rub. What constitutes ‘relevant’? Who decides? What criteria are being used ? To be an acceptable solution, the answer will have to pass muster both with the regulator (at least as far as banks are concerned) and customers.

Google use a bunch of criteria to determine which results are the right ones to show us. There are SEO areas where we are led to believe it is the quality of information which determines which websites float to the top. There are also SEM areas in which people bid for our attention.

Historically, Google and Microsoft have both insisted on the power to determine the default setting in a particular circumstance. Microsoft made Internet Explorer the default choice for Windows users and enjoyed a good deal of control over people’s internet experience as a result. Google lost a court case in Europe over the way it managed default settings. The results are now visible in Android when users (including me) have to pick the default app for each task and are reminded, each time, how to undo it.

The ability to rank and order responses to a query destined for the internet is a power indeed. The power of being default, in a world of lazy people is even greater. It’s possible that the Nazi bot will be getting paid to suggest particular companies first, from the plethora of responses.

What does it all mean ?

There are still some other factors to consider. There will be some intelligence offered by the platform. It seems Facebook and Microsoft’s Azure will allow developers to offload some tasks to an AI engine. One can imagine a future in which there are a lot of imaginative AI services in there which allow you to ‘recognise’ emotion, what pictures are, something conversational or funny to say in response to a user comment. It seems that the cacophony might be less if human like rules are used by bots to determine whether to initiate a conversation.