The concept of superhumans being bread by governments has been in Sci-Fi for a long time. One of my favourite films of all time is Star Trek 2 The Wrath Of Kahn which covers the subject, extending a storyline initially explored in an episode of The Original Series. Kahn is a genetically modified individual who takes on Kirk and the Enterprise. It holds IMDB’s top rating for a Trek film, 7.7 / 10. 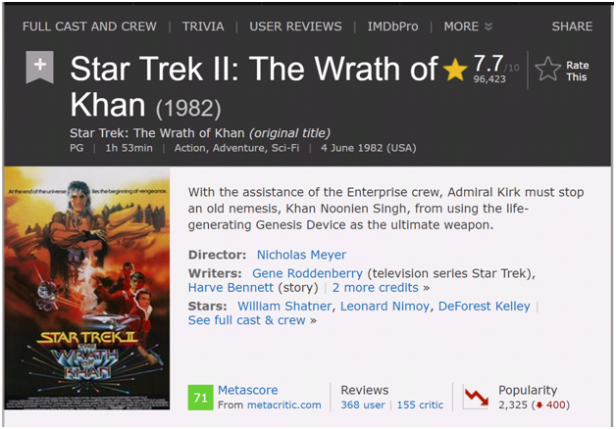 The idea of genetically modified people also popped up in the Xfiles.

CRISPR, something I’ve written about before in this blog, now provides an opportunity to create in the real world what these Sci-Fi stories depicted, a genetically modified human being which, by our standards could be a ‘Super Human.’

Most of the CRISPR trials I’ve seen covered use animal subjects. This carefully controlled experiment was ‘the first’ (they are careful to say ‘first known’) CRISPR adaptation experiment undertaken on a human embryo. Others, similar in nature are described in the article as having been performed in China.

One of the goals of the first experiment was to ‘fix’ a problem with the genetic code of a disease. When this is dealt with by CRISPR, it (the genetic ‘defect’ ) will be eradicated from the family as a hereditary factor. I guess that explains the importance of the work and significance of the experiments. These ‘germline’ developments affect all offspring from that point and fix genetic defects not just once, but forever.

The New Scientist has covered a similar story from the UK in which ‘Three-Parent Babies’ have been allowed by the UK government.

Experiments like these and CRISPR offer the chance to ‘turn off the genes’ which expose people to the risk of, for example, lung cancer. It has already saved lives. Of course, success in the endeavour could improve the medical treatment of millions.

The Chinese appear to be taking a lead

There are virtually no restrictions beyond the moral on scientists pursuing these opportunities. Only 12 countries have signed up to the pact to not play with human embryos, and even they are figuring out how to do it. Technically it’s ‘very easy.’

Again, the New Scientist suggests that as many as 20 human embryo experiments are starting in China. They have a particular advantage. The unusual level of control the Chinese government have over their people has allowed them to list the genetic codes of thousands of Chinese citizens.

Information about CRISPR was first released to the scientific community in 2011. How surprised would you be to find that China had a genetically perfect five-year-old somewhere ? They’d start winning Olympic events around the 2026 games.

There is a scheme in Australia under which one can submit DNA and have it studied to identify specific genetic diseases. My wife and I have considered it and decided against the prospect at the moment. It may affect health insurance applications, and there are no commercially available treatments to make benefit of the knowledge we would be provided.

In the USA and China, similar schemes exist. Chinese parents can have their unborn babies examined to determine the genetic elements of their makeup which are not desirable.

Unfortunately, the same technology which can be used to eliminate cancer can also be used to target bioweapons to particular ethnic groups or those with a single genetic marker in their ancestry. Individual politicians or public families could be targeted.

These theoretical risks are accentuated by the very real likelihood that thousands of people will be working on this stuff in their sheds or basements of medical facilities.

Aeronautical technology has changed the world over the last hundred years. We were all surprised when those planes flew into those buildings on 9/11. The attack opened the eyes of the world to a new type of threat, the ramifications of which we are still now working through. Those involved used relatively cheap means to cause as much physical and psychological damage as they could.

As CRISPR turns what was biology in to a software problem, and we benefit from the advances it gives us, we may expect to be ‘surprised’ in a similar way. As I write this, North Korea and the US are trading insults. Trump has talked of a military option. A CRISPR virus targeted at the North Korean leadership might be an effective way of dealing with the problem. It would also seem like a better tool than nuclear tipped ICBM for North Korea to hurt America. Would we be surprised if either of those things happened ?

Star Trek was set in the 23rd Century. Unfortunately, but long before then, we seem likely to see superhuman populations growing up or soldiers ‘built’ by a foreign government or a disease designed to kill a president released in to the air over the city in which he or she lives.