I rarely write about telco in my personal blog. This time, I’m going to. That means there will be a few links here to the website I run (whatphone.com.au.) Sorry about that but WhatPhone is telco focused, so it’s the best place to share content mentioned in passing, which is relevant.

The solution in a nutshell

There is a problem which has been on my mind for about 6 months now. Money tends to go to things which are scarce. That’s why diamonds and city parking spots are expensive.

When Australia launches 5G, (a most believe that will happen in 2020), data will no longer be scarce (which I’ve written about before ). If you think it’s a strange point of view to suggest something which so valuable now could quickly get given away for nothing, remember: You used to pay 25c for each text message you sent spend a few bucks an hour for international calls. Now, voice and SMS are mainly free, international calls are included in contract plans, and you use Skype let you call your Grandma in Alaska for nothing.

The question then, as people transition to the new 5G service, with phones which can use the new super-fast data speeds, is how do the phone companies maintain their business models? At the moment, they charge you per GB for data. In the background, your data usage is increasing. The phone companies match that every year with competition keeping prices low.

One of the alternatives is a / are subscription model(s)

Keeping this in a B2C context, subscription models are seen as more convenient for users who never have to remember to order the product, it’s just there when they want it. They can cancel it when they want to which many find convenient.

Subscription models work for businesses, too (selling to consumers) because they make it easier for businesse to predict their revenue on month by month basis. Many companies, including Microsoft, are moving to a monthly charge for their service.  To state the obvious, monthly charging seems to have worked well for Netflix and they’re doing OK.

Inspiration came from considering the customer, not the technology

I think the reason I’ve been stuck on this problem for the last 6 months is that I have been looking at it from the telco end, ( i.e. data won’t be scarce, so how can they charge for it ) not the consumer needs end. This fallacious approach occurred to me while I was constructively passing time one Saturday afternoon.

We’re in the second half of 2017 as I write this, so, 2020, which is when industry insiders (my friends who still work for the telcos) tell me that 5G will be rolled out is only two and a half years away. I hear there will be tests of 5G services, undertaken by Telstra, starting next year. How would I spend the next 30 months if I worked at a telco?

As covered in many places, some of the telcos are doing well at adding entertainment into their phone plans.  This provides some level of insurance against data, network and product commoditization. Telstra has some great sports content. Optus’ music packages on their prepaid plans are hard to beat. OVO Mobile does well on niche sports, too. In many meaningful ways, they are already charging for this service each month. (Optus explicitly charges $15 per month for access to the EPL – the English Premier League.)

Charging for a service is where the telcos want to be. They fear being seen as a dumb pipe. They have made a start at it with their entertainment service. So, what needs ( which could be addressed by telco services ) will people have in 2020? How will things change between now and then? What are the opportunities for telcos, in charging for services, from those changes?

Factor 2: Internet updates between now and 2020

Much of these headlines taken from here and here.

When the robots come, we will be spending more time talking to humans, in human ways

What’s the size of the problem we’re trying to solve?

What’s current APRU (the industry measure for success, Average Revenue Per User) let’s say $30 per user per month and see where we get with these new services. 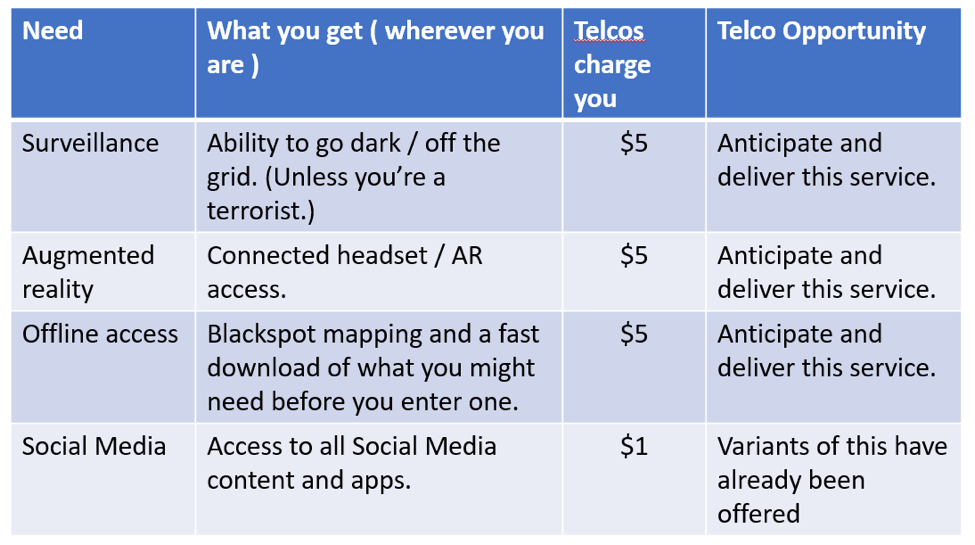 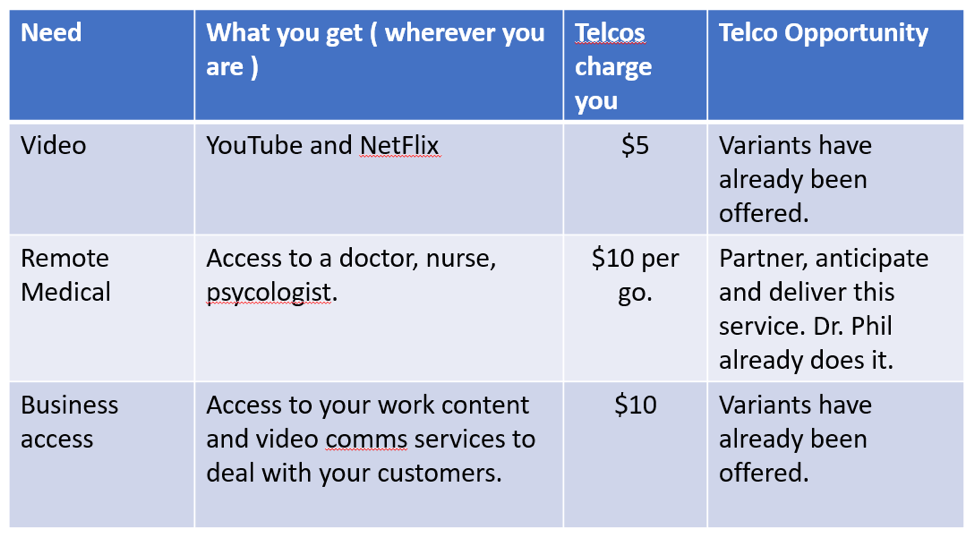 There is plenty of room there to grow services

The phone companies have a feature to them that sets them apart from any other business. They own the last mile connection to your phone. That means they can charge you what they want for it. They have huge customer bases and lots of data on you so they can target these cross-sell and upsell services to you.

We are used to paying for a handset to be connected to the Internet and buying data with which we do anything we like. The price for that can be undercut in a race to the bottom caused by competition but it takes a while, and the main competition (on price) comes from the MVNOs and telcos own their pricing.

This sort of solution wouldn’t be hard to put in place. Telcos can partner for the content and services and use the data they have for upselling. It’s early days for this idea. I will continue to think about it.

I always just assumed that Quantum computing services would be offered from the cloud. Engadget is one of the few I’ve seen to have written on the subject: https://www.engadget.com/2017/07/17/google-puts-quantum-computers-to-work-in-cloud/

There’s not much out there that I could find on the subject of preferring monthly payments. This site was great ( and his business seems to be going well, too. https://www.entrepreneur.com/article/