At school and university, they taught us the theory ‘Trickle Down Economics’. The idea is that, if rich people were allowed to accumulate more wealth by reducing taxes, they would go on to invest some of the extra profits they made. The winnings of the rich would eventually be spent and thereby ‘flow down’ to the rest of the economy.

Looking back, ‘theory’ was a funny thing to call The Trickledown idea. This theory is still being used to inform government policy today ( see below. ) However, looking back on my education, Trickle Down is to Economics what MWDs – The Weapons Of Mass Destruction were to the Iraq war. Both are false justifications for government decisions which should never have been made and which caused significant problems for a considerable number of people.

The ‘theory’ doesn’t stand up to even basic questioning

I am as guilty as anyone in accepting the ‘theory.’ I just accepted the idea as it was presented to me twenty years ago. To be honest, even then I had been given enough information to at least question it. The economics I remember says that poor people have a higher propensity to consume. ( An unnecessarily technical way of saying that, when you’re poor, you save a smaller proportion of your income. ) So, why would giving more money to rich people make them invest more?

I have never seen any evidence for that Trickledown to exist in practice. As I mentioned in another article, proof of corporate tax cuts benefitting the economy overall is mixed at best. So how then is it possible that this unproven ‘theory’ is still being used today? Especially when…

There is evidence that the opposite is true

There have been many articles recently about a trial in Seattle which raised the minimum wage – kind of the opposite of Trickledown. Economists would usually say that raising the minimum wage would lead to a reduction in employment and more automation.

However, there is an increasing amount of evidence, including a prominent case study which is ongoing in Seattle which any impartial viewer would have to agree at least creates a good deal of doubt as to whether that’s true.

The whole proposition behind Trickle-down hinges on the fact that businesses will pass on the cuts they get by hiring more people. In Australia, in the last 12 months, there have been two policies which seem to fall from the ‘Trickle-down’ belief.

Trickledown is becoming even more nonsensical

Years of this sort of policy have created significant levels of income inequality, a subject which warrants several blog entries in itself. Income inequality makes people unhappy and societies fragile.

Some things have changed in the last 20 years, and they make the situation worse, especially in Australia. 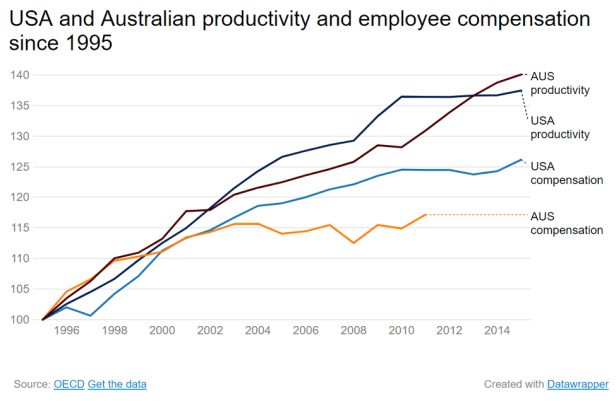 This stuff is just one example of the flaws in the economics they are still teaching kids and uni students. They might claim that they acknowledge ‘Trickle-down’ to be a theory. But if they’re basing policy on it, it is being implemented as a rule. They state beliefs as facts, and that’s worrying. Some other people do that, they’re called priests and, while everyone is entitled to their own religious freedom, I don’t think we should be guiding the wealth and well-being of our country with philosophy. In some very real sense, Economics is a religion.