Introducing the ‘Usual Suspect’ articles to prove this point

I listened to a fantastic podcast ( sent to me by Nick Cordrey – thanks Nick ) which made me laugh out loud. In his presentation, Edgar Whiteley talked about the ‘usual’ stories in the press which relate to AI. See below.

Below : An amalgam of typical headlines associated with Artificial Intelligence in the press. 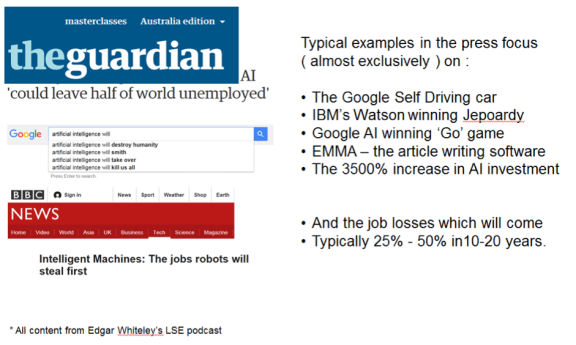 I laughed when I heard this because, I must confess, I had read articles exactly like the ones he was talking about an incredible number of times. I had formed the majority of my views on the subject from them. Here are the super scary, often repeated forecasts of unemployment associated with AI.

These are concerning numbers from several reliable sources including the BBC. I was convinced.

The difference between Narrow AI and General AI

The threats here relate to narrow AI. Narrow AI can be ‘trained’ to perform a simple task like recognising cancer cells in a picture which may or may not contain them. As we’ve seen, some narrow AIs have been trained to win at Jeopardy. Narrow AI shows itself more often in ways you don’t realise. The product recommendations you see or the search results you are provided.

General AI is something that would pass the Turing Test. Essentially, a computer with general AI is something with ‘life skills’ so good it could pass a human test. For example, knowing how to reply to someone saying: “The Bible says Jonah hated living in a Whale but my nan has lived in Wales for years and she loves it. Why do you think that is ?”

We are a long way from that although some people are rightly concerned about it. General AI is what Skynet was in the Terminator films and it tends to be what people are most scared of when they hear about Artificial Intelligence. Most well informed observers don’t believe we will see it for some time. Maybe 20 – 100 years.

What would you do if you believed these forecasts

I guess my point of view is that it is usually best to have a realistic view of the world, including the threats you might face. One can then make some rational decisions as to what you want to do to either mitigate, avoid or accept the threats.

Artificial Intelligence raises the important question of ‘rent’ in the economic sense. Rent is any income derived from a factor of production. When there is no work, the only kind of income we receive is likely to be from an asset. Having Super, savings, shares and even a house to rent out ( while you stay on a boat, for example ) is all useful insurance against the threat of unemployment. It will be no use saying ‘I had no idea this was on it’s way’ when your job is displaced. There won’t be the money around for the government to help you.

While there are some questions over the models which have the concerning claims about the number of people who will be made unemployed, they can’t be ignored. It does seem prudent to be taking steps which consider these risks, even if the net result might not be as bad as we believe.