The idea in a nutshell : It’s possible that AI will create jobs as well as displace them. People have skills which can’t (yet) be ‘emulated’ :o) by technology. They’re leaders, adaptable, benefit form common sense, use their imagination and have ‘ethics.’ Computers don’t. In practical terms, current AI and other software programmes are narrow to the point that they can conduct a ‘task’, not a whole job. Which has some interesting ramifications in itself….

Most articles in the press at the moment suggest we are heading for massive job losses form the rollout of Artificial Intelligence. Admin ( including thinking admin like Legal Research, Accountancy ), logistics and transport jobs seem most at risk. These jobs have an overlapping characteristic which I cover below. There are two sides to every story, however. We should consider both. What factors will work against artificial intelligence replacing us all with robots.

Flaws in the argument suggesting all jobs will disappear

Without wanting to rehash the fantastic podcast they have which we transcribed in full and have an abridged version of here (this is largely owned by the speakers in that podcast. I have added a couple of points of my own) Criticism of existing studies includes these elements: 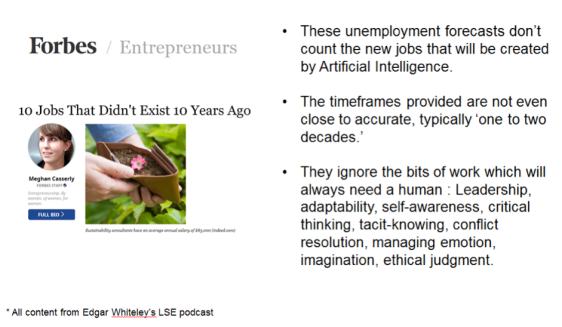 Jobs more likely to be safe will include

The jobs which will be around in the future are those which have a broad base to them. These are jobs which require workers to employ multiple different, parallel activities in unison. For example, creativity, critical thinking, business casing, innovation.

Elements of each job might be replaced by process automation. For example, there are AI programmes which will book your appointments for you these days and manage your calendar like a personal assistant would. But, if you are influencing, dreaming and then building an idea or improvements to an existing idea, those other bits won’t be replaced for some time. Software can automate well established models or procedures. They can’t automate stuff that’s hard to predict.

What computers can’t do yet :

People to manage and maintain the internet of things – or the robots that do.

Below : The CSIRO outlines 4 scenarios about the future of work in Australia. 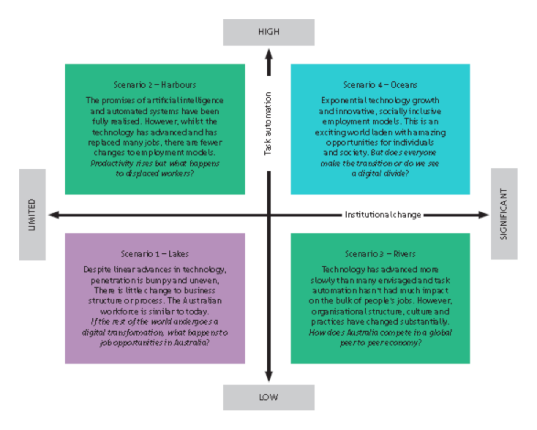 This all hinges on how ‘narrow’ AI is at the moment

The influence of AI on employment is clearly not a case of either ‘displace’ or ‘create’. AI will displace some employment, starting with low value jobs. It will also create jobs and make people a lot more productive (and therefore valuable to the companies which hire them)

Real results from real trials suggest that it is – narrow AI is really narrow – it’s task narrow at the moment. In the podcast they actually didn’t talk about it as AI, they talked about workflow automation. The jobs which are listed as most at risk appear to be the ones which are mostly single task.

Admin jobs, accounting tasks, logistics and transport jobs all have significant elements to them which are single tasks. Accounting has a lot of maths. Transport and logistics have a significant component of ‘drive’ to them. Legal has a significant component of ‘review / synthesise / identify ideas in large amounts of data. Admin has a lot of filing and simple procedure work. That seems to be why these jobs are at such risk of replacement. Automating the task largely automates the job.

So what happens when the boring bit of our jobs are automated ? There’s an ‘alpha’ factor to the automation of drudgery. I.e. an ‘unknown benefit’ of people being freed up from the drudge work. It frees peoples’ thinking to the point that it happens at a new level.

When the economy created enough capacity that we could support people beyond feeding them ( i.e. we moved from agrarian, hand to mouth economy ) we started working on science, art, literature – the things which might now be considered the best bits of humanity. It created room to do the right thing in a broader context. We freed slaves and slowly started accepting the bits of society which had been previously downtrodden. It was the process of civilisation.

What will the fact that people are doing less drudge work ( no mindless, repetitive work ) do for the production of new ideas ?